The bi pride flag has become an internationally recognised symbol of our movement, so it’s surprising that so many people don’t really know where it came from or what it represents. Now, we can’t have that, so here is our guide to the history of the bisexual flag.

There are lots of symbols that represent homosexuality. From the (pun not intended) gaiety of the rainbow flag to the sombre significance of the inverted pink or black triangles and the mythological connections of the labrys, you can usually find a motif that suits your purpose.

But until 1998, there was no universal symbol under which the movement could unite. Many bisexual people did not feel a connection to the already iconic rainbow flag, which seemed to belong only to lesbian and gay people. But the rainbow flag had been undeniably effective. By this point, the rainbow pride flag was just 20 years old and already an icon, a utensil of mass visibility and a banner under which to rally. The right flag, clearly, could be a potent tool.

That is when Michael Page came in. He designed the pink, purple, and blue flag which would fast become a global shorthand for bisexuality.

“We wanted to let the larger world know that we were here, we’re proud, and we demanded respect,” Wendy Curry, the then-President of BiNet USA, told us “The flag, unlike our pins and even t-shirts, was something we could rally behind as we demanded equality. It gave us a sense of power and strength, something that was lacking before”.

Page encouraged use of the flag far and wide, saying on bicafe.com, “The Bi Pride Flag is the only bisexual symbol not patented, trademarked or service marked”, and giving specific instructions on how to reproduce the graphic for yourself.

The triple triangle motif, sometimes referred to as the ‘biangle’ was used by some groups in the US, and it was from this that Page took his inspiration. The bi pride flag is made up of fesses of magenta, lavender and royal blue in a ratio of 2:1:2. If you don’t speak vexillography (that’s flag design to you and me), two fat stripes in pink and blue, with a thinner purple stripe sandwiched between them. Each colour had a specific meaning: pink, a colour often associated with homosexuality, represents same sex attraction; blue, its opposite in the common consciousness if not on the colour wheel, different sex attraction; and the purple represents a melding of the two into something entirely its own.

The lavender stripe that runs through the flag also serves as a link to the wider queer community. In the first half of the 20th century, the colour was strongly associated with queerness – think of Cole Porter’s lyric to I’m a Gigolo (1929), “I’m a famous gigolo, and of lavender, my nature’s got just a dash in it” – and the association still survives in terms like ‘lavender marriage’ and ‘lavender menace’. The inclusion of lavender in the bisexual pride flag indicates our place in the history of the LGBT movement and our intent in being a part of its future.

But there’s even more to the symbolism than that. Our invisibility is woven into the digital fabric of our banner. Page wrote on (the now defunct) biflag.com:

A reading of the flag that sees it as a metaphor for the Kinsey scale, widely shared on Tumblr, is not mentioned in what remains of Page’s notes on the design process.

The new flag was unveiled on 5th December 1998 at a birthday party for Page’s site bicafe.com (also now defunct), with a first official outing on 22 March 1999 at Equality Begins at Home, a rally held in Tallahassee, Florida, where it was caught in a shot by a photographer for the Tallahassee Democrat. That photo graced the paper’s front page.

The flag was called, by no less an authority than Fritz Klein in the Winter 1998 BiNet USA Newsletter, “a most important new Bi symbol,” and it caught on like wildfire.

“Our community was SO tiny back then,” said Curry. “I don’t think there were more than 200 of us worldwide”.

“Bicafe was getting attention, as there was nothing like it. But the listservs were ground zero for bi activism.”

Wayne Roberts - an activist from Queensland who was active on the listserv groups - brought the flag to Australia, where it appeared at Mardi Gras in March 2000. Two months later, it was at World Pride in Rome, bearing the URL of bicafe.com. By 2002, it reached Reykjavik. Meanwhile, BiNet USA printed badges and stickers and distributed them widely.

Curry credits Marcus Morgan, now coordinator of the Bisexual Index, with bringing the flag to the UK. When we asked him, he said that he doesn’t remember consciously doing so, but Curry is not surprised: “We just did our bit, with no idea at the time that it would matter to anyone.”

Into the 21st century, the bi pride flag has become exactly what it was intended to be: an icon. Purple is the de facto colour of the bi movement, an exercise in branding queerness that may have its roots in the lavender menace and The Colour Purple, but which has its future in the vast and nebulous world of online activism.

Bicafe.com closed in 2012, but an international bi community thrives on Web 2.0. First LiveJournal and now Tumblr have become hubs of online activism and community organising of a sort that did not exist in the 1990s. No longer is the bisexual community that small knot of activists working mainly out of North America and the UK; today it’ is a vast and interconnected network that uses the internet to facilitate community organising on an unprecedented level.

Social media is a place where the colours of the bisexual pride flag are almost universally recognised, so ingrained into online queer culture that we don’t question where it came from. It is a constant presence, a backdrop to our activities online and off and it continues to give us the power and strength that those early adopters at BiNetUSA drew from it.

From little seeds come mighty oaks. Michael Page disappeared from the bi scene soon after bicafe closed, but his legacy is strong. The bisexual pride flag and the colours it uses are reflected in logos for local bi groups and organisations globally, endlessly remixed, reworked, borrowed from and adapted. Wherever we see the lavender tricolore we understand the reference. 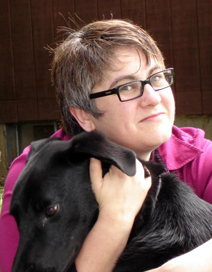 Biscuit thanks Wendy Curry, ex-President of BiNetUSA, for her help in preparing this piece.